Many people these days are concerned about how hormones are used in livestock production, both in dairy and beef.  It's an understandable concern.  We all want to give our families the healthiest food we can.  It seems to me that the hormone controversy is missing some key information that is needed to make an educated decision on the consumer's part. 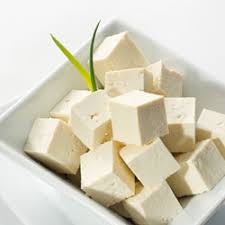 I guess this is what tofu looks like, not that I know.

When hormones and food are talked about, it is most always in relation to beef or dairy.  Have you ever heard of hormones in fruits and vegetables?  No?  Do a Google search on hormones in soybeans.  Or look up "estrogen in sweet potatoes."   There are many foods other than meat and dairy that contain levels of hormones, often times at much higher levels than the hamburger you grabbed at the drive-thru.  It is difficult to find data on actual levels of hormones in a given food, but let's do a little experiment.  Estrogen is one of the most commonly-used hormones given to beef cattle to increase performance.  A web search for "foods high in estrogen" ought to have beef nearly leaping off the screen, right?  In fact, it doesn't even make any of the lists I looked at.  That's strange, don't you think?  Maybe the hormone levels in beef really aren't as high as they are made out to be. 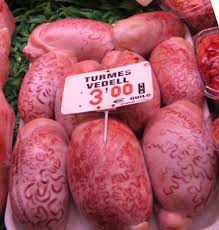 For sale: Non-hormone-treated beef?
(yes, those are what you think they are!)

For those who want beef, but have been convinced that hormones are the devil, non-hormone treated beef, such as organic, has been recommended.  If that's what you want, more power to you.  I have sold some non-hormone treated cattle myself.  Every year in fact, even before it was popular.  They are called "bulls."  Now, which do you suppose has higher levels of hormones, an entact bull (that means he has testicles) or a steer (testicles removed) with two small time-released hormone capsules in his ear for the last 100-150 days of his life?  In case you are having trouble, the answer is A.  And it isn't even close.  Trust me on this one.

Would you think twice about eating a hamburger if you were told it came from a bull?  Probably not. 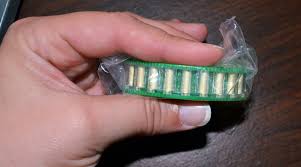 A cartridge of Ralgro, a commonly-used beef cattle implant.  Each of the capsules contains one dose and is inserted under the skin on the backside of the animal's ear.

There certainly is some confusion about how hormones in our food affect the body.  Do your own research.  Just be sure to check both sides of the issue.  If someone brings up hormone-treated beef as being bad, ask them what they know about hormones in their tofu.  "Hormone-free" anything is a misleading label.  Everything has hormones, and that is not always a bad thing.

Here's a few other articles about hormones in beef:
Hormones in cows and what it means for your health – Fox News
Hormones in your food – should you worry?  – Huffington Post
Steriod Hormone Implants Used For Growth in Food-Producing Animals – FDA
Beef Myths – Growth Hormones in Cattle