…water tanks, that is.

We are realizing that the limiting factor for us in our grazing management continues to be water.  We can't change how much falls from the sky (even though we do have influence over how much soaks in – see our Water Management page), but we do have the ability to distribute drinking water for the cattle.  We decided to try some alternatives to the big tire tanks that we usually install.  Those are wonderful watering arrangements in most situations, but we wanted to try something a little less permanent and with a little quicker setup time.

The two rectangular fiberglass tanks are made by Montana Fiberglass.  They each hold about 1165 gallons.  The tanks are situated on a temporary crossfence.  The yellow plastic handles on either end of the guardrail anchor the fence.  A strand of insulated wire connects the two fences to carry power from one side to the other.

The tanks are fed from a well about 1.5 miles away.  We had an existing water line (1.5" PVC six feet deep) buried in the area, so we tapped into it for this setup. The 450 feet between the buried line and the tanks is 1.25" HDPE rated at 160 PSI laying on top of the ground.  An Apex XtraFlo valve is installed in each tank.  They are a cost-effective valve that requires only 1.5" drop in water level to acheive full-flow.  This is intended to be used only for summer use.  The above-ground water line and exposed tank valves would not do well with our South Dakota winters.

We used guard rail to keep the livestock from crawling into the tank.  Angle iron brackets attached the end pieces to the side pieces.  There is room for animals to drink on all four sides.

The 1.25" HDPE pipe is seen coming into the tanks here.  Also, you can see the black insulated wire running along the guardrail.  This carries the power across the tank for the electric fence tied on to each side.  I did it this way to protect the water from being energized in the event of a break in the fence.

Here's another setup I did for our yearlings.  It's a smaller herd, thus the size of tank is much smaller.  This handles 110 head of yearlings easily with the 5 gallons per minute delivered by our rural water service.

The 9' Sioux poly tank holds about 950 gallons.  It is fed by about 1400 ft connected to our rural water system by 1.5" HDPE rated at 200PSI.  I have a little more work to do here.  I plan to install two 90 degree elbows next to the tank so it is not just hanging in the air as it is now. 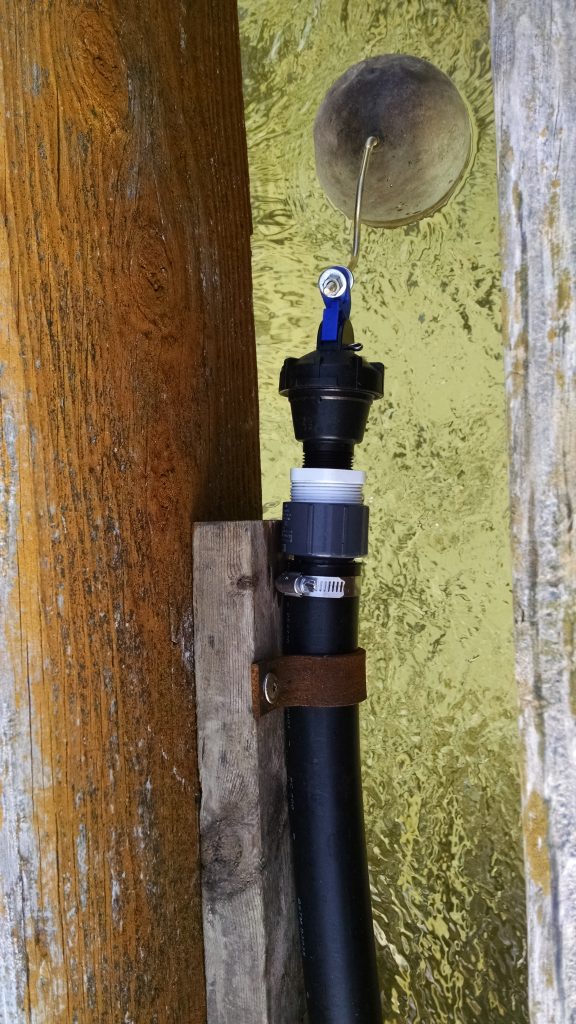 This tank is also regulated by an Apex XtraFlo valve.  However, this is a top-fill setup.  The brass rod I used did not come with the valve, but it works.  Another metal clamp like the one shown here attaches the pipe to the post as the pipe comes over the edge of the tank.

There's already been modifications to each of these arrangements, and there's sure to be more as we work out the kinks.  It's fun implementing some "rancher engineering" on these projects.  About the time we get this right, we'll probably hatch a new idea that might work even better.

Update: Both of these setups worked well.  The yellow poly tank was used to water 110 yearlings with no problems.  The twin fiberglass tanks watered 240 cow/calf pairs, but we did have some issues with an elbow fitting coming loose.  Once that was resolved, it worked well.  The lesson we learned was to make sure you have snug-fitting components.  I usually have to use a small propane torch to heat up the pipe so it has enough stretch for the barbed end of the fitting to be inserted.  If I don't need the torch, then it's likely that the fitting will leak or come apart all together.

The following entry will be the last from Garth Gatson, our summer intern.  I hope you've enjoyed the perspective he's shared here, at least as much as we've enjoyed having him with us.  Hopefully he benefited as much from his time with us as we did from having him here.  Keep his name in the back of your mind, you just might hear it again someday.  Garth has a bright future ahead of him.

Incredibly enough, summer has come and gone and I find myself back in class at the University of Missouri. After spending three months at RHR, I have been back in my own backyard for over a week now. I have a week of classes behind me, I’ve looked over all the cattle here at home, and things are back in the groove as if I had never even left.

When I was researching the philosophers for my last entry I ran across a quote that fits pretty well here.

I don’t know if this is true for rivers, but I can tell you for certain that it is true of farms and ranches. In many ways both quantifiable and abstract, I did not return to the same farm that I had left in May. The rains came early and often in Missouri this summer, and as a result our crops look better than ever. Our corn has a chance to average 200 bushels per acre, and our beans look fantastic as well. The calves that were quite small when I left gained a couple hundred pounds over the summer and now look quite different. What was an empty space of lot behind my house when I left for South Dakota has been covered with gravel, and piers have been poured for a big new shop that is about to be built.

The people have changed too. My sister lived off the farm during the summer for the first time and worked at a bank in Columbia. My cousin was married over the summer and moved from the farm to Kansas City. This was the first summer that I hadn’t spent on the farm, so Dad did several things differently without me around to work. It also gave him a chance to look at the farm and its future a little differently.

The biggest change, however, is in me. The things that I learned and experienced this summer affected me permanently.  I’ve learned that there are different ways to do almost everything. From working cattle to cutting hay to establishing long term goals for a business, everything can be done a little differently. I have learned to do things differently, but also to think about things differently as well. Luke often talks about paradigm shifts and cultivating the ability to see opportunities in what once looked like challenges.

I’ve learned that you don’t really have to know how to do something to give it a try. Several times this summer while working on a project I would ask Luke how he wanted me to do something. He would often reply with something like, “I don’t know; I’ve never done this before. What do you think?”. It wasn’t that Luke had no idea what he was doing; it was simply that he was trying something for the first time and ironing out the process as he went. I learned that if you only do what you already know how to do really well, you end up limiting yourself. At some point planning and research can only take you so far, and it is time to try new things out for yourself.

And most importantly, I’ve learned that it is people that really make the difference. I am someone who can get along just fine spending all day by myself baling hay or fixing fence. While I certainly enjoy being with my family very much, I can also learn to spend my summer 800 miles away from home. But being with people you enjoy certainly makes a difference. While I rarely left the ranch this summer, plenty of visitors made their way through RHR. Garnet tells me that the number for the summer is approaching 500, and I have had the opportunity to visit and spend time with many of them. I appreciate the knowledge and entertainment that each of them brought to the ranch. What I enjoyed the most, however, was simply being able to live and work with the Perman family. Lyle, Garnet, Luke, Naomi, Isaac, Ella, and Grandma Vivian all played a special part in making my summer enjoyable. For trips to Akaska, lunch in the tractor, warm kouchen, pictures from the summer, a portrait from Ella to “Mr. Garth”, and a thousand other things large and small, I owe the Perman family a very big thank-you. Most of all, I am thankful simply to call them my friends.