Ok, so this isn't normally the type of plant diversity we are shooting for…

The above photo has a bunch of weeds in it.  From the road, that's all you can see.  I'm sure there have been a number of folks driving past this field wondering what kind of poor managers we are to allow all those weeds to take over that field.  I would be thinking exactly the same thing normally.  But, I know something most of them don't.

Here we are a little closer to the weedy mess.  You may start to notice some flowers.  The purple ones are alfalfa.  They yellowish-reddish one is a blanket flower, a native wildflower.  Over towards the right, in the foreground, theres a tall, slender spear of grass that goes almost from top to bottom of the photo…that's the seed head of sideoats grama, a warm-season native grass. 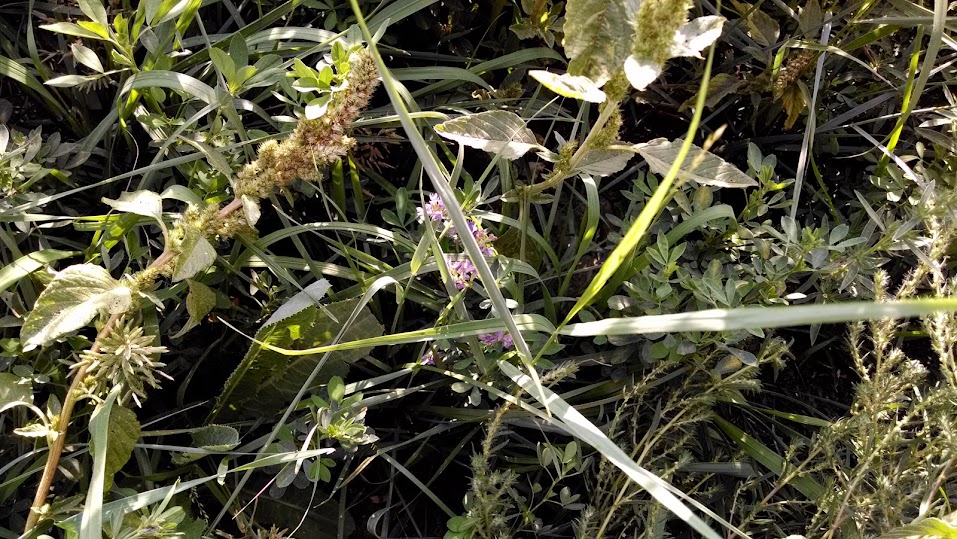 Now we're up close and personal with this weed patch.  But things look a lot differently now.  Yes, we still see weeds.  But there's a lot more grass in there than previously thought.  And lots of alfalfa coming as well.

This field, and another nearby, we seeded back to grass and other plants this spring.  It had been farmed or cut for hay for quite some time, maybe 100 years.  It has always been marginal farm ground due to the heavy clay soil type.  Here's the mix of plants we sowed:

It normally takes 3-5 years to get a stand of native grasses and forbs established, so it might look like a weedy mess for a while.  Spraying the weeds would kill all the wildflowers we planted, so that's not an option.  We did mow the field in June to trim the weeds back a bit, giving the new seedlings more sunlight and less competition, but you can't tell now.  These weeds are all annual weeds.  They establish easily, grow quickly, and their seed can survive a long time

But you know, the weeds aren't all bad either.  Jay Fuhrer, a district conservationist with NRCS in North Dakota, says that soil tries to heal itself, and it does that with living things – which weeds are, of course.  It's nature trying to cover itself up.  Those weeds are protecting the soil from sunlight, wind and water erosion, and softening the impact of falling rain (which can cause soil crusting, limiting the amount of precipitation that can soak into the soil).

The weeds are also feeding the below-ground biology while the native perennial plants are getting established.  A teaspoon of productive soil has between 100 million and 1 billion bacteria.  Imagine two cows grazing on an acre of rangeland.  Believe it or not, there is the equivalent (by weight) of two more cows feeding off that acre – that is, the below-ground biology.  They need living and dying plant and animal tissue to live.  Without the weeds, the bacteria don't have much to eat.

In time, the species we seeded will take over and the weeds will diminish.  Until then, it will be the ugly caterpillar that nobody thinks much of.  We're expecting the beauty that unfolds over the next few years will be worth it though!

Our resident expert on classical philosophy and high culture, Luke, quoted Aristotle a couple of mornings ago. As I was trying to put together this journal entry I knew what I wanted to write about, but I wasn’t quite sure how to spin it. After several frustrated attempts, I remembered Luke’s quotation and it seemed to fit. I found a couple more quotes from famous historical philosophers, and I think that they outline my thoughts pretty well.

(Note: As far as I know Luke isn’t really an expert on classical philosophy or high culture, but he did quote Aristotle.)

First say to yourself what you would be; and then do what you have to do.       -Epictetus

This quote goes to the heart of nearly everything we do here at the ranch. A few overarching principles are an important foundation for decisions. These include things such as a desire to promote soil health, protect water quality, provide habitat for wildlife, manage productive grasslands, and cost effectively produce quality beef. Determining goals such as these fits with the first half of the above quote. The second half gets down to the application. It is important to remember how daily tasks such as estimating forage production, moving electric fence, and checking water tanks fit into the big picture. Without a guiding plan these tasks become meaningless. Without proper application the big goals become hollow. This summer I have learned the importance of both of them, and the necessity of teaming the two together.

It is the mark of an educated mind to be able to entertain a thought without accepting it.       –Aristotle

Last week Lyle and I attended a North Dakota Grasslands Coalition ranch tour of Fettig Land & Cattle Company near Napoleon, ND. The Fettig family runs a unique and somewhat unconventional operation. From May to October they custom graze over 1100 head of yearling heifers. These cattle are all kept in one herd that is moved to a new pasture at least every other day, and sometimes as often as every 6-8 hours. Their pasture sizes are quite small (never more than about 35 acres and sometimes as little as 3-5 acres), meaning that their stocking density is very high. Over the course of the summer this one herd will graze more than 70 different pastures. On the Fettig operation every permanent fence is a single strand of high tensile smooth energized wire, which is also somewhat uncommon.

The Fettigs have been able to entertain a thought, or in this case a century’s worth of traditional ranching thoughts, without excepting it. Instead they have evaluated for themselves what methods best allow them to reach their management goals. Similarly, we work to explore new ideas here at RHR. Some of them are accepted and implemented on the ranch, others are discarded in favor of other techniques. I have always enjoyed toying with new ideas, and I have been given plenty to consider here.

The mind is not a vessel to be filled but a fire to be kindled.       –Plutarch

This quote represents the most valuable things that I have garnered from my time at Rock Hills Ranch. That is not to say that I haven’t picked up directly applicable skills and knowledge. From grassland management to grazing system development, from hay production to livestock handling procedures, and from equipment operation to fence construction, I have absolutely learned things that I will take home with me and put to use. These are the small end, however, when compared to the new way I have of looking at all aspects of ranch management. Now more than ever I see the opportunities that abound everywhere. I have come to recognize that there are different ways to do almost everything. Whether the old way seems perfect as it is or less than ideal but stubbornly unavoidable, I have learned that there are other means to reach the same end point. Some of these ways may be better. Some of them certainly aren’t as good. But at the end of the day there are other ways, and at least some of these methods merit further consideration and exploration.

(Author’s note: I am down to my last 96 hours here at RHR, but I will have at least one more journal entry sometime in the next couple of weeks. That entry will likely be some sort of a summary of my internship.)