The 2012 hunting season is well underway.  We've had four groups of pheasant hunters so far.  Group sizes have ranged from three to seven.  It has generally been easier for the smaller groups to take their limit, although the seven "Wisconsin Poachers" took 14 to 21 birds each of the five days they hunted.  Overall, I believe the average has been 2.2 birds per hunter per day.  That number would of course be a little higher if everyone was a little better shot!

Here are a few photos of this year's season thus far.

Charlie and his dad Joe with their pheasants and grouse.  Elvis wants to know why they're stopping with one more bird to get.

Lowell & Brandon whacked a few green heads while Max held down the back seat of the Blazer.  What a show dog!

Dennis & Mike picked up a few things besides pheasants when walking Grandma's north trees.  But I think if you asked them, they'd say it was worth it. 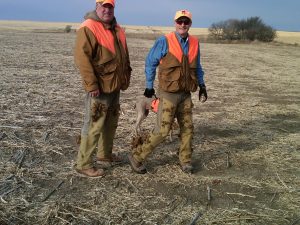 This nice muley buck was taken on the Walk-In north of the yard.  He's been around for a few years.  Looks like he finally grew enough points for someone to get interested in him! 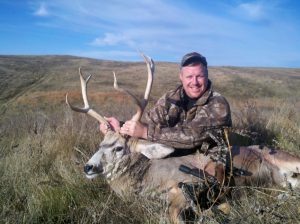 Grandma catches a chicken theif!  Next time Mike should wear camo, the orange made him easy to spot. 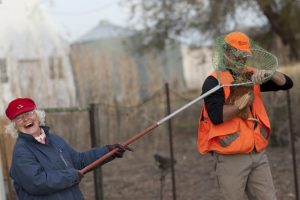 We still have plenty of birds around. Wild ones I mean…if you are wanting chickens, better check with Grandma!  If you are interested in hunting or staying with us, visit our Contact Us page and drop us a line.  November is rather full, but we still have openings in December.