Saturday we freeze branded the heifer calves. These heifers are coming up on their first birthday, and have "made the team". They will be bred this summer to calve next spring as two-year-olds. We sold the bottom end (B and C squad, if you will) at the auction barn, some in February and some in early March.

So back to freeze branding. It is different than the traditional hot-iron branding. Rather than using a hot iron to create permanent identification, freeze branding uses extreme cold to alter the pigment of the hair. The process is more labor intensive than hot branding. Here's how it goes.

The first step is to clip the hair off the area that we want to place the brand.  Since the hair is an insulator, it is necessary to remove it so we can transfer the cold from the irons to the skin more efficiently. 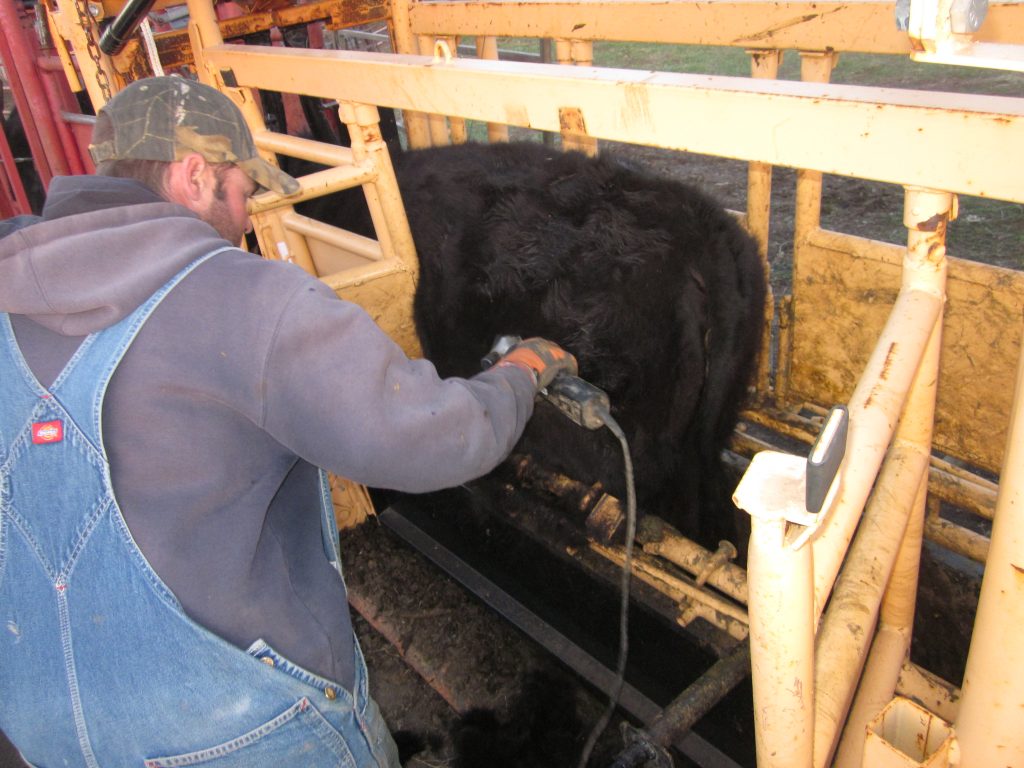 The next step is cleaning the clipped area.  I squirted methanol on the spot and then used a stiff bristled brush to get the dirt off the area.  Alcohol can be used instead of methanol, but methanol is cheaper. 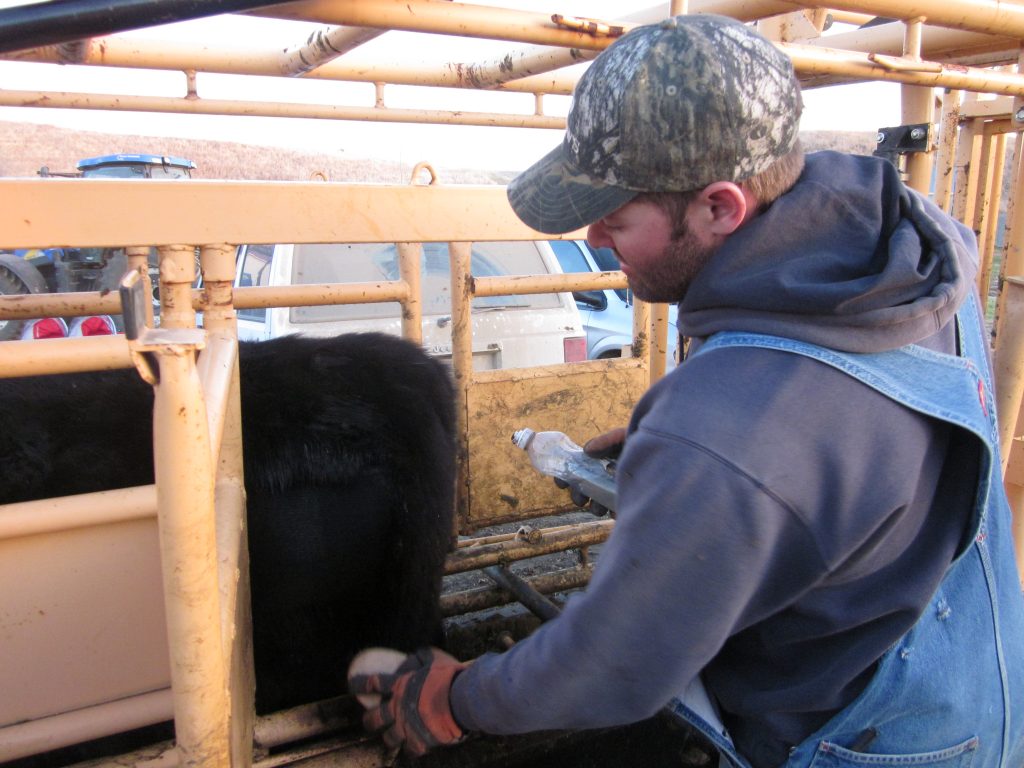 Besides freeze branding (that's coming up yet), I also gave them a vaccination.  This shot is to guard them against getting sick during early pregnancy.  It is critical to keep her healthy during that time, because if she gets sick, it can have a big impact on the calf's development.  I also put a new tag in the heifer's ear.  The number on the ear will be the same as the number we are applying with the freeze brand.

I had an audience for part of the day, you can see them in the background. 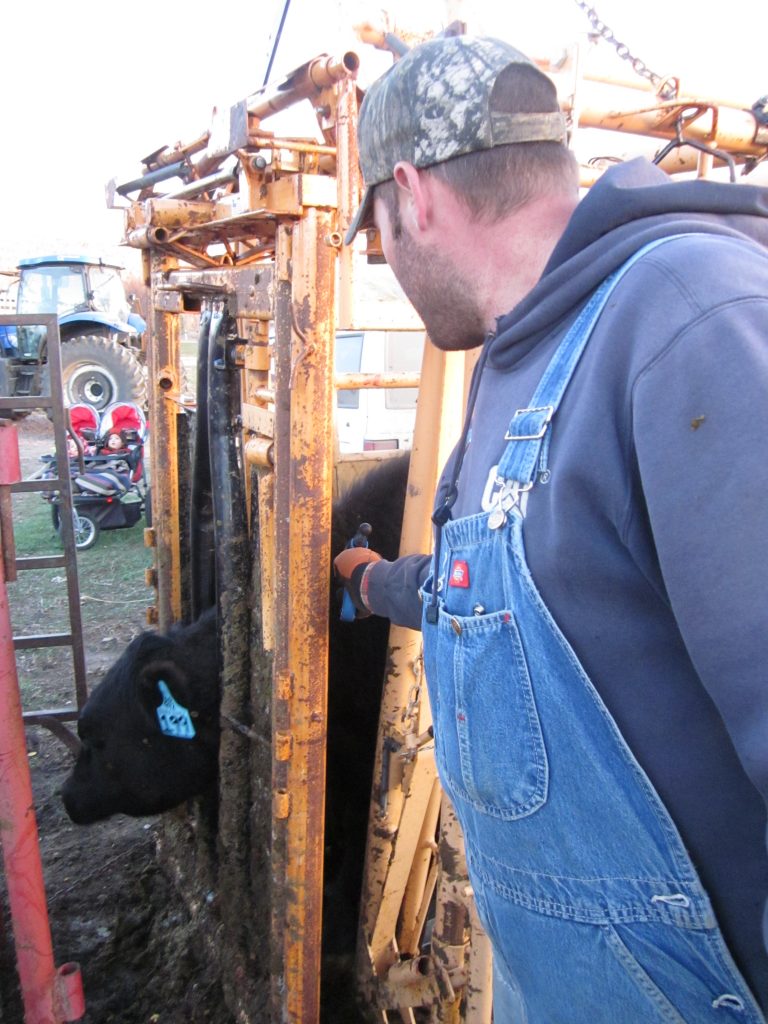 After I finished my prep work, the heifers would go into the next chute to have the brand applied.  We enlisted the help of Dustin for this job.  He lined up the supplies (methanol, dry ice, clippers, irons) and did the "important" job.  The irons were held in contact with the hide for about one minute.  Timing is rather important, so Dustin kept track of time with his watch, which is mounted on the top bar of the chute. 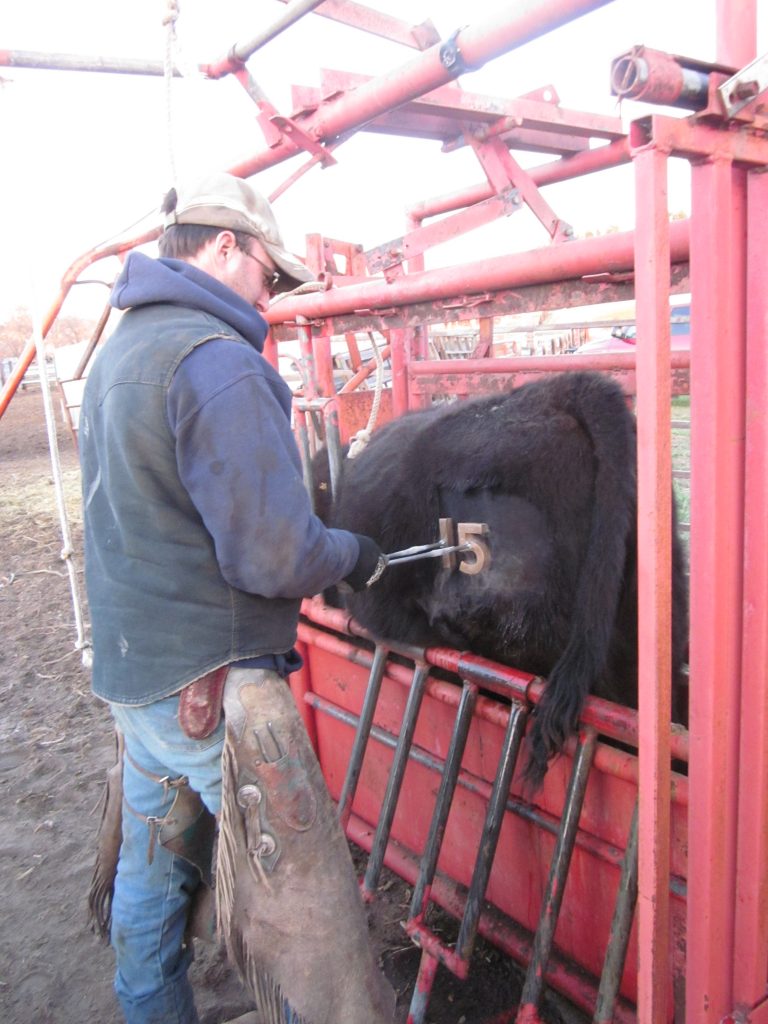 When it is done right, the numbers leave a frozen imprint on the hide. 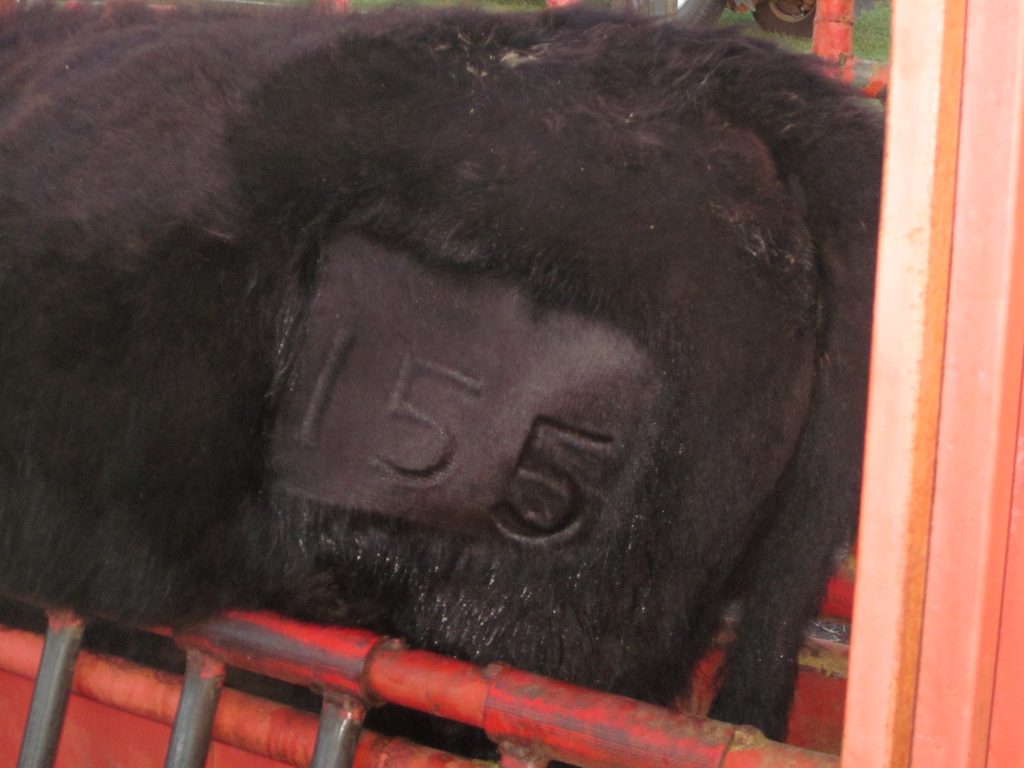 As you can see, we only applied a three-digit number to the heifers, not our ranch brand.  That is because freeze branding is not a legal proof of ownership in South Dakota.  The reason is that freeze branding is easier to manipulate.  In other words, if a thief stole our cattle, they would have a much harder time changing a hot brand than a freeze brand to look like something else.  We don't have problems with cattle rustling in our area, so either way we don't worry much about it.  The reason we freeze brand these cattle is to keep track of who is who.  Ear tags work, but sometimes they fall out.  Having the freeze brand means we always can tell each animal's ID.

Here's a shot of both chutes in action.  You can see the irons in the coolers behind Dustin.  The coolers had several inches of dry ice and methanol in the bottom.  He used two sets of irons, numbered 0 through 9.  That way, there was always a cold iron for the next digit. 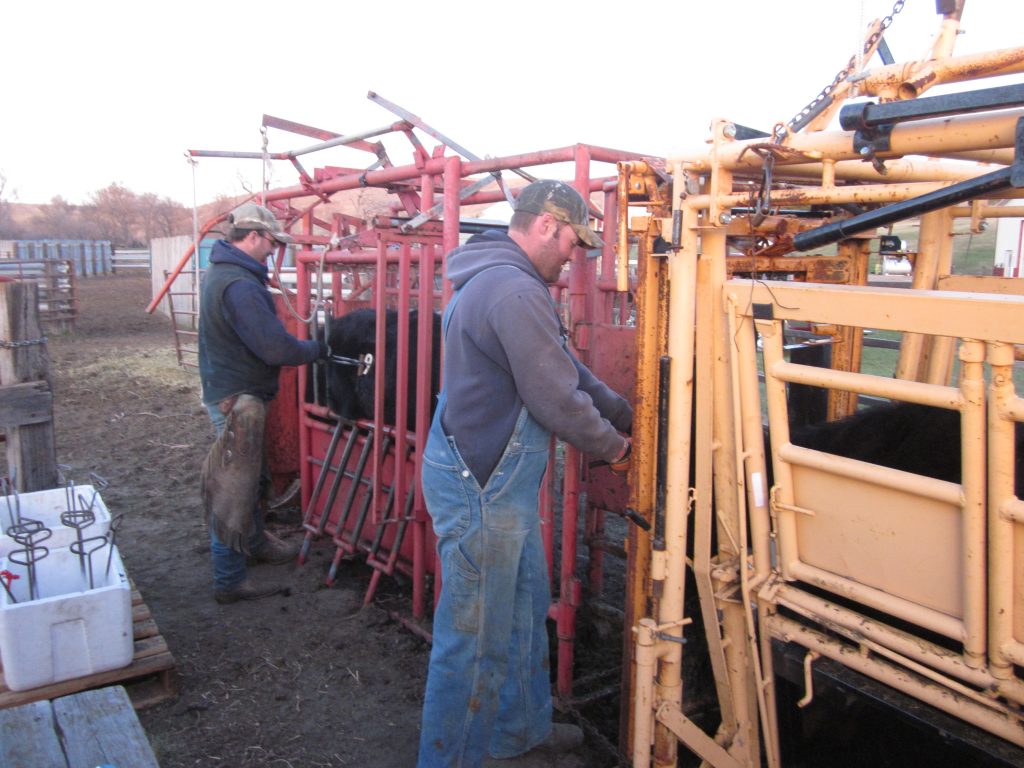 We branded 100 heifers and 12 bulls Saturday.  We started at 1 pm and had finished just before 10 pm.  It was a long day, but things went very well.  Having good help like Dustin and Dad makes a big difference.  Dad stopped by and helped bring the cattle up to the chute every now and then, and had to do some emergency repairs to the red chute at one point.  I can't forget about Naomi – not only was she the photographer, but she made sure we didn't get hungry.  The burishkas for supper were great!