Our bus tour included stops at four different feedlot facilities, each with a slightly different twist.  The first three all specialized in feeding cattle to finish.  "Finishing" means feeding a high-energy ration with the goal of growing and adding fat.

An aside about finishing cattle:

Fat is the energy that is left over after the cow's maintenance and growth requirements are met.  Intramuscular fat, aka marbling, is what makes a steak tender and juicy. It is why some people pay $90 for a USDA Prime filet mignon.   Without a high-energy diet, the beef would be tougher and drier.  Some of you may have had grass-fed beef and experienced this.  Not all grass-fed beef is tough and dry, but it is more difficult to provide the energy needed for intramuscular fat when grass is all they get to eat.  It is possible – I tasted some excellent grass-finished beef last week – just more difficult.  That's why corn is so widely used in finishing rations.  It supplies a lot of energy in the diet and is easier to manage than grass in a finishing ration due to its rather consistent nutrient and feeding qualities.  Corn also allows cattle to be finished any time of the year, and in virtually any location.  The seasonality of high-quality grass production makes grass finishing in the fall and winter months difficult, especially in northern climates.  I'm not arguing that one is better than the other, as that is a matter of personal preference.

Our first visit was to Grant County Feeders, which is owned by JBS Five Rivers.  JBS is a large corporation that has significant market share in the beef packing industry, and have expanded their business in recent years by acquiring Five Rivers, a major group of feedlots.  Grant County Feeders has a one-time capacity of 120,000 cattle.  The day we visited, they were running at about 88,000 head.

The scale of such an operation is mind boggling.  The logistics of delivering feed to 100,000 cattle is something FedEx would be jealous of, not to mention keeping track of who is getting what, which pens are being shipped to the packing plant on a given day, scheduling trucks to haul the cattle, getting the vaccinations lined up for the cattle coming in that day, monitoring feed supplies, and keeping all the equipment in good repair.  The term "factory" has a bad image to many people, but in regards to efficiency and consistent outcomes, it is an accurate descriptor of Grant County Feeders.  This ain't no mom-and-pop outfit.  They know exactly what costs and what pays, and do the best they can to make a consistent product in a cost effective manner.

We were able to observe as they brought in a new group of steers.  Each animal is weighed and sorted based on sex, hair color, and weight into pens of like cattle; managing a group of similar cattle is easier than a mixed up bunch.  The workers doing the inprocessing worked very quickly and efficiently. The working facility was based on Temple Grandin's designs, as were the facilities in all the other feedlots we toured. 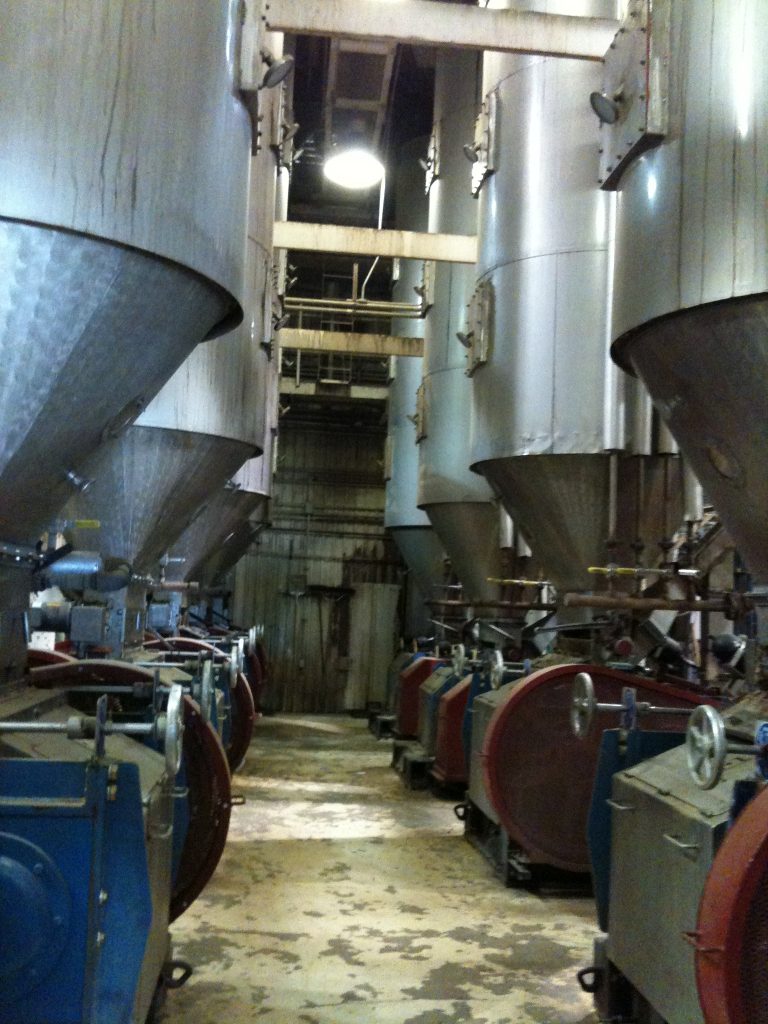 The state-of-the-art feed mill at Grant County Feeders included a fleet of steam flakers.  These machines are used to turn kernels of corn into wet corn flakes.  They really did look like what I eat for breakfast, except they were damp and hot.  By steam flaking, the nutrients in the kernel are more readily absorbed by the cow's digestive system as opposed to feeding the kernels whole.

Our next stop was near Garden City, KS, to visit with Sam Hands.  Triangle H Feedyard, owned by the Hands family, is part of a family-owned farming and ranching operation.  It was much smaller than Grant Co. Feeders (only 4000 head capacity) and did not have the infrastructure as a result.  However, they have developed a reputation for doing a great job feeding for high quality beef.  They have developed ties with Gardiner Angus Ranch (which we also visited on this trip…more about them in another post), doing some testing of their new genetics for feedlot performance and carcass merit.  They deliver quite a few cattle to US Premium Beef, which as their name implies, is a major player in the high-quality beef market.  USPB is another business we learned about on the trip.  I'll explain more about them later as well.

It was interesting to visit with Sam, as he has a diverse experience in farming and raising cattle.  Our conversation drifted between many different subjects related to agriculture.  Like a lot of farmers and ranchers, his world does not end at the county line.  Being successful in agriculture these days often means paying as much attention to what's happening in DC around the world as it does what's happening in the North 40.

Poky Feeders near Scott City, KS was the last feedlot we visited.  It is a 34,000 head feedlot.  The unique part of their operation was the way they keep their pens full.  They specialize in custom feeding, which means someone like us would send them our cattle to finish.  If they have pen space left over, they have the option to fill them with cattle coming off of some ranches they lease.  This allows them to keep operating at near capacity.  Empty pens are not a good thing in the feedyard business, just like empty storefronts are bad for Main Street.

What did I take away from these tours?  First, I am impressed by the knowledge each feedlot manager possessed.  Knowing the proper way to feed an animal might seem simple, but there are so many variables.  Knowing how to adjust rations for different environmental changes, different types of cattle, and different marketing goals requires skill.  They are also required to monitor feed expenses and adjust accordingly to develop the most cost-effective ration…sort of like a housewife clipping coupons and setting the week's meal plan based on the grocery store sales flyer.  Except on a little bigger scale.  They have to be good with people, managing employees and keeping customers happy.  Keeping track of what the cattle cost to buy, as well as what they will sell for is also important.    In short, running a feedlot is just like running a lot of other businesses.

The dedication of the managers and employees was evident as one of the managers told us how if there is a snowstorm, everyone is required to come in.  Bunks and pens need to be cleaned out ASAP to keep the cattle comfortable and give the feed trucks somewhere to put the feed.  I can identify with this, as the same rules apply for us when the weather turns bad.  Everything else stops until we know the animals are taken care of.

Environmental regulations came up often during our tours.  The EPA keeps a tight reign on the manure coming out of these lots.  It was not uncommon for them to spend seven figures on waste containment and handling systems.  One frustration we heard was that these regulations can be a moving target; what's acceptable now might not be in a couple years.

Despite containment systems, there was still a distinct odor at each lot.  I got used to it after a little while, but each time we stepped off the bus at a new place I noticed it again.  I can't say that I would want to live downwind of a large feedlot.  I guess that is why so many are in western Kansas where there aren't a lot of people to notice.

I know that some people are very much against CAFO's (Confined Animal Feeding Operations).  I can understand the opposition if one had to live next door and deal with the smell.  However, the yards were all well-kept, the animals had plenty of room to move around, and certainly get enough to eat and drink.  It should be noted that if the animals are not comfortable and healthy, they will not gain weight, which is the whole goal of a feedlot.  An abused and neglected animal is unprofitable as well as unethical.  I would encourage anyone who has never visited a feedlot to go out and do so before formulating an opinion.

Next up:  Finney County processing facility – a recap of our tour through a Tyson meat packing plant