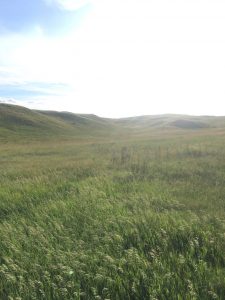 un comes up later in the morning and sets earlier in the evening, there are a few deciduous whose leaves are turning from green to the numerous colors they transition to. I’ve started wearing silk neck scarves in the morning and evenings when I’m working and sweaters and my hooded sweatshirt tag along with me everywhere. If you sum up what I just said, you can conclude that fall is coming. Another sign that fall is approaching, would be the South Dakota Grazing School put on by the Grassland Coalition. Before I get any farther I just want to make sure I say thank you to the Perman family for encouraging me to go.   I could write an entire journal just about the grazing school and my experiences and what I took away from it.

The students-when I think of school, I think kids but I can’t call people with gray hair kids can I?- were broken up into 5 predetermined groups that we worked with and discussed workshops with. One pupil stated that he had been approached by a neighbor who said he was wasting grass by implementing a rotational grazing system. Another student then said “are you wasting grass, or are you building land”? And that statement got me to thinking. Could you smell the smoke last week? Don’t worry; it was just the gears in my head burning the cobwebs out.

In a previous journal, I explained a “take half leave half” method of grass management taught to me by Dr. Smart during my time at South Dakota State University. I’ve learned that roughly a third to half of the root mass of a plant dies every year, and that that dead plant material is what becomes what we call organic matter in the soil. We need to leave some plant material above the ground so that the leaves can catch sunlight and develop new roots. So the rest of this journal I’m going to give you the 22-year-old explanation of why I think that the statement is right on point.

The New York Times wrote an article in 2002 about how the United States loses 2 acres of farm ground per minute due to urban sprawl. The trend lately has been that when a farmer wants more farm ground or loses some due to things like that, they find new ground to raise corn and beans on that shouldn’t raise corn and beans and other crops. I have personally witnessed the lost of almost 200 acres of grass when a neighbor burned a pasture, then broke it (used a tillage tool to break the sod and expose black dirt for cultivation). I wasn’t a math major in college, but I know that we lose a lot of land everyday and that there is something scary about losing that land. There isn’t any more land being created.

As a young man who wants to become the best land manager that he can, I know that I have to do everything I can to preserve the land I will operate on. My passion will always be horses and cattle, and they need grass. And as long as I need grass, I’m going to leave some. Everyone who manages land needs to keep conservation in the back of his or her mind. Whether they leave the grass for plant vigor and building land, wildlife habitat, or they want cover to catch snow, we need to all help conserve the land. Conservation is how we are going to ensure that my generation and generations to come will get their chance to live off the land.

Just some food for thought.