Skip to content
Recent stories on my news feed have made bold declarations about how cattle are even bigger contributors to climate change than they previously thought (they already thought they were bad).  Their conclusions are mostly focused on greenhouse gases – how much methane cows produce, and the carbon implications of raising cattle.  I’m not a scientist, so it would be presumptuous of me to offer my opinion of the data or research they are using.  I think I can, however, point out some data points that are absent from virtually every anti-cow article I’ve ever read.

END_OF_DOCUMENT_TOKEN_TO_BE_REPLACED

As I teenager I could not wait to get away from small town rural ranch life and experience what the world had to offer. I had a bad case of wanderlust and I count that a blessing.  In the last decade I’ve spent time in a handful of different cities, states and countries. I’ve traveled abroad, learned another language, met celebrities, worked in the corporate world, fell in love and married a man with an accent. To my teenage ears that would have sounded like a dream.  In many ways it has been my dream fulfilled.

I wrote my dad a letter once as a teenager and in it I said, “no matter where life takes me Rock Hills Ranch will always be my home.” At the time I didn’t realize what a rare thing it is for a person to always have a childhood home to go back to. My children get to walk the same dirt paths I walked to the chicken house to pick eggs, skin their knees on the gravel roads I played on, catch bugs and pick wildflowers on the same hillsides I did the same, and swing in the tree swing that was put up when I was a child. We don’t get to relive our childhood but I have the unique pleasure of seeing my childhood through adult eyes with my children.

This summer we had the fortunate opportunity to spend a month back at the ranch with our whole family. I noticed myself teaching my offspring many of the same life lessons in similar ways my parents taught me. Ranch life affords a unique setting for education. We had in-depth discussions on life cycles when we had to remove a dead chicken from the coop, an easy and natural conversation about gender identity when my eldest wanted to know the difference between the male and female donkeys, and a couple of conversations about how we care for and protect our family and those we love as we watched baby birds being pushed out of their nest, a doe protecting her fawn and a mother cat teaching her kittens to hunt.  They both squealed with delight as they dug for potatoes, my daughter gorged herself eating peas straight from the garden and they learned both biology and fine motor skills picking eggs every day. They understand where food comes from, and starting to value our connection as caretakers of both plants and animals.

Diversity is everywhere at Rock Hills Ranch. In nature, all living organisms have value and importance and must be present in order for the ecosystem to work. What a neat thing to watch my children grasp. A lot of the world’s most pressing problems could be solved if we as humans embraced that truth within our own race. Hard work, practical thinking, problem solving, manual labor, opportunities to practice patience and the need for teamwork are all principles available in abundance at RHR. There are so many more I could name but the bottom line is, I’m pretty confident in saying rural life provides hands on opportunities to learn all of life’s most important lessons.

The most overwhelming experience on the prairie is witnessing the fingerprints of our Creator. The beauty of the prairie grasses shimmering and moving like ocean waves in the wind, the delicate wildflowers staying intact despite the elements, the fiery oranges and soft pastels of the sunsets and the intricate bird songs all dug deep into our souls, deepening our appreciation for and recognition of an artistic and loving God.

We had ample time at the ranch to talk about family values and what we want our children to remember and stick with them as they grow to be leaders, truth-seekers and caretakers of the next generation. We got bit by the country bug and are itching to keep living life off the fast track, more intentional and in touch with our natural world. We are back to our normal life in suburbia but we hope our new normal will include more dirt on our hands, sharper eyes and ears toward nature and a slower cadence to life.  My dreams for the future look a little different than those of my teen years. They have a striking resemblance to what I couldn’t wait to get away from 20 years ago — only with the addition of that handsome accented husband and some precious children in the picture. I may live 1200 miles from Rock Hills Ranch, but in my heart, it will always be home. 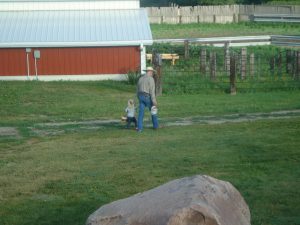 Have you ever heard of a rancher giving his cows all the hay they will need for the entire winter on December 1?  Of course not, they would waste way too much of it.  Instead, cattlemen will spend lots of money to be more efficient at feeding harvested feeds.  It bothers us ranchers to see cows wasting a bunch of hay in the winter.  That's because we worked dang hard getting that hay put up, racing the thunderstorm to get it baled before the rain.  Then we had to fight the cold weather and the gelled-up tractor to get it hauled out to them, and now they are just pooping all over it and standing at the gate wanting some of that second-cutting alfalfa they know is in the yard.  Ungrateful cows!  So we buy bale rings, bale processors, feed wagons, feed-efficient bulls, etc in order to cut that winter feed bill.  Some solutions are cheap(er) such as bale rings (but the "haysaver" bale rings cost more, of course!).  Others are expensive to buy, and expensive to operate, such as grinders and processors.  And yes, these things help efficiency.  But none of those things make the haystack actually get bigger.  Few of them make the cattle healthier or gain weight better.  All decline in value over time.

There's another "innovation" out there to increase feeding efficiency.  This innovation has the potential to do the following:

– decrease feeding losses by up to 30%
– increase animal performance
– increase the size of your feed pile (yep, you read that right!)
– make your feed stocks less suceptible to drought

Before I reveal this ground-breaking innovation, how much do you think that would be worth?  INCREASE the size of your hay pile?  That's crazy talk!  Less affected by drought?  30% less feed waste?  What kind of miracle machine or tool are we dealing with?   Where's the nearest dealer?

Let's go back to that dumb rancher who gave his cows the whole winter's worth of hay on December 1.  How short-sighted of him!  Yet, how many neighbors do you have that do the exact same thing with their summer "feed"?  You see, the same rules apply – plus a few new ones.

Fence and water allow you to restrict what cattle have access to.  Controlling the availability of forage the cattle have access to makes them eat things they might not otherwise.  This is akin to only feeding your cows a day or two's worth of hay during the winter.  You want them to "clean up" their plate before you give them more.  Same thing applies on pasture.  Season-long grazing averages around 20-25% harvest efficiency (that means the cow actually only eats 20-25% of the production).  The rest gets over-mature or pooped on.  That 20-25% probably comes from the same plants being grazed over and over again, weakening their root systems.  More intesnive grazing systems can have harvest efficiencies of 40-60% without damaging the plants being consumed.  The reason is that the plant has adequate time to recover before being eaten again, unlike the plant that is bitten off over and over again in the season-long system.

Fence and water also allow us to place cattle in the right place at the right time, and keep the cattle from being in the wrong place at the wrong time.  By allowing pastures adequate rest between grazing events, the quality of the feed goes up.  There will be less overly mature, unpalatable grasses.  The amount of feed increases as well, because the plants are able to develop more extensive root systems.  (This is where your "feed pile" actually gets bigger!).  When the grass has a chance to rest, it can compete with weed pressure better as well.  More developed roots allow them to weather droughts better, and absorb more moisture in wet years.

I hope more cattlemen start viewing their summer grass with the same attitude they do their winter hay.  It has the potential to be a real game-changer for many operations.