Early this month my rancher happily announced to his friends the commencement of a new profit center. He so enjoyed hosting a guest milk cow last year, he decided he needed his own. He determined to have a Jersey because we really don’t need enough milk for the entire town of Lowry like Bunny the Holstein provided last spring. We just want milk for the family and cream for Grandma’s kuchens. He contacted Graber Jerseys, well known in purebred dairy circles and found the perfect candidate. We had the trailer all shined up to fetch her when we were informed that she had a displaced abomasum and was going to the ball park. Translation: one of her four stomachs slipped to the wrong spot rendering her useful only for John Morrell hotdogs.
Another two candidates were found closer to home. One was already in production, but came sans calf. Baby calves are extremely expensive this year and we don’t need two daily milkings. The other was a heifer ready to calve. My rancher brought her home and grandson Isaac dubbed her “Rosie”.
As with many other first pregnancies, Rosie’s involved some drama. She quit eating and drinking soon after she arrived at our place. Her hair coat looked rough and she ran a high fever. The vet was consulted. The diagnosis: hardware in her stomach. The vet put a magnet down her gullet, pumped her full of antibiotics and we all crossed our fingers. She survived. This is how much farming in the area has changed. Dr. Anderson works extensively in Edmunds, Potter and Walworth Counties, and Rosie constitutes her total dairy clientele.
Rosie’s previous owner wasn’t sure what bull sired her calf. My rancher had nightmares about petite Rosie trying to throw a 90 pound calf. He figured she’d calve within a week or two of arriving on the ranch. Near the expected time, my rancher checked on her frequently, visions of a C-section motivating him to brave the cold to take a look. After nearly 3 1/2 weeks of “she’ll calve any time now,” she finally did. A puny red calf with white markings popped out quickly, apparently the product of easy calving Hereford genetics. Little Sunshine is almost as big as Rosie’s postpartum udder. Most hunting dogs weigh more than she does.
So our new enterprise is underway. We froze enough colostrum for our own upcoming calving season. Sunshine is growing and the barn cats are fat and happy. Next week she’ll commence supplying us with milk and cream. At the current price of dairy products, and with all the summer visitors to feed this summer, the Jersey Rose might just be the ranch’s biggest profit center. 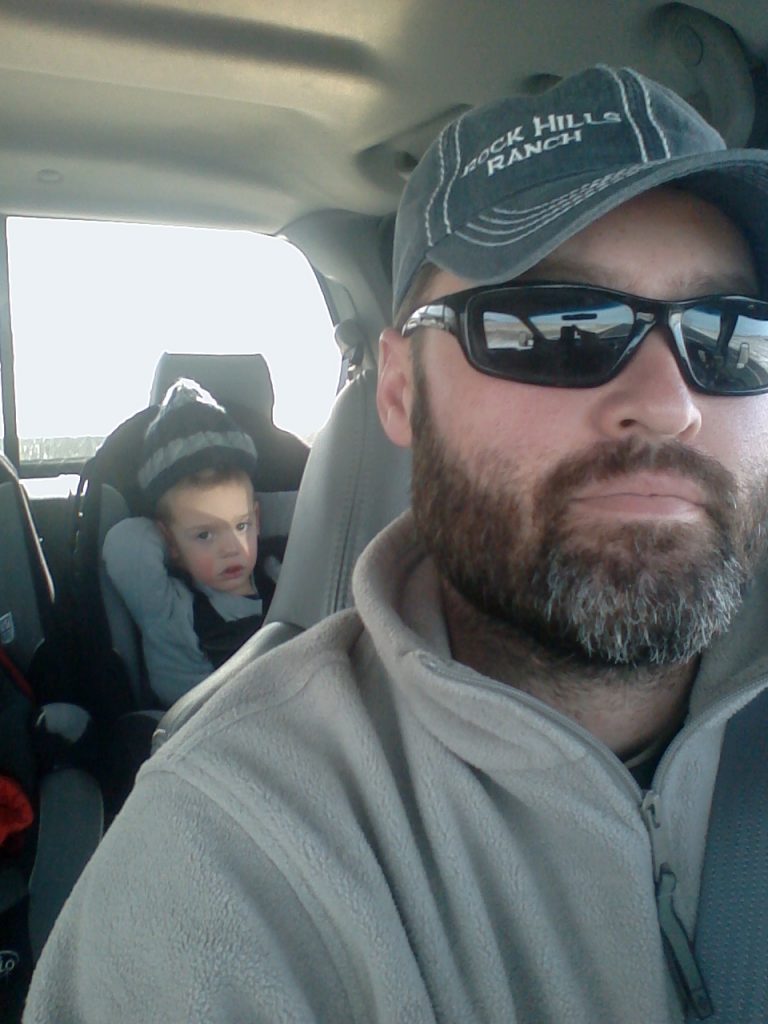 A couple evenings ago, Isaac and I went out to move some cattle to fresh pasture.  He's always game for anything involving "work," but with extra enthusiasm when the cows are involved.

He would have walked all the way out to the cows had I let him.

This pasture has a little sentimental element to it.  My grandpa ran cattle here before my dad.  One of my very first cattle-working memories was having a picnic out here next to the corral with Grandma Vivian and my cousins while the men were doing something with the cows.

After we got the herd moved, we parked on another hill and spent a while enjoying the evening.  I taught Isaac about litter and that it is good.  Not the empty-beer-can-in-the-ditch litter, I'm talking about the dead grass and organic matter that covers the soil surface between plants in a healthy rangeland.  It keeps the soil cool, retains moisture, and helps rain soak into the ground.  We didn't get that in-depth, but it was fun watching him explore the rocks and grass and forbs growing there.  We sat quitetly as a flock of Canadian geese flew right over us – low enough that I was whispering "take 'em!" under my breath.  We listened as Wilson (our dog) howled from the yard, answering back at the coyotes to the east and south.  It was a quiet enough evening that we could hear the cows munching on grass from 75 yards away.  It seemed a crime to start the 4-wheeler to take us home.  It made me think about how I need to find another old plug of a horse for the kids to ride for times like this.

We idled home and had a bowl of ice cream – a Perman tradition, especially after a long day trailing cattle like we had.  I took Isaac up to bed after the usual routine.  After prayers, as I was tucking him in, he said, "Thank you daddy for working with you."  I didn't cry but sure did catch a lump in my throat.  I said, "You're welcome buddy, thanks for helping me."  He said it again before I closed the door to his room, just to make sure I understood.  I don't need to explain any more.  It is safe to say I will remember that exchange for quite some time.

I came across this picture in one of the photo albums at Grandma's house last winter.  It is taken in the same pasture, just from a different hill.  Just like in the first picture, you can see Lowry in the distance, as well as "Haystack Hill" to the right of town.

Things change.  Grandpa's Herefords have been replaced with Angus.  The dam in the old photo is washed out.  We've added some crossfences and water tanks.  Lowry probably has 50 fewer people.  My photo was taken instantly with my smartphone rather than on film, no dark room required.

However, some things don't change.  Haystack Hill is still there.  There's still four-legged bovines wandering these Lowry hills.  The coyotes howl just the same as they did back in the 60's when that old photo was taken.  Litter is still important.

In 50 years, I expect Haystack Hill to still be there.  I expect that cows will still be roaming those gumbo flats.  Most of all, I hope Isaac will be able to have good memories of this land; of times when he learned something about the world around him, and learned how to coexist with it.  I hope he learns the value of working until the job is done.  I hope he learns the importance of sitting on a hill and taking it all in.